The reason for my starting to do a blog is drawing to a close, The Puppet Challenge Online Exhibition is due to be on show some time in June, on Clive’s artlog. I will keep you posted on that. I have found it to be a good way of showing family and friends what I ( and sometimes Graham) am working on, so I think I will continue with it. Summer is a busy time for us, what with running the gîte and the B&B, and then there are my art exhibitions and any other work that comes up. It won’t always be of interest, so there will be times when I won’t blog, but then maybe I have got a taste for it, and I will bore everyone to death anyway! 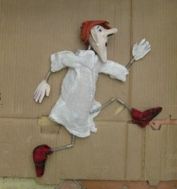 Although the storyboard for the legend of L’Ebérou is not finished, ( it runs up to the same point at which I stopped doing the original sketches), it achieved it’s purpose by getting me suitably motivated into creating the puppet itself, which was my aim.  ( I did, however, manage to finish writing the synopsis. ) I am indeed my own worst enemy, in that I got so involved with writing and illustrating the piece, I spent far more time on that than I ever intended. This was partly from frantic fear at making a puppet, when so many professional puppet-makers will be contributing to the exhibition. But then, as Clive says, this is not an exam, it’s meant to be fun; and I have had fun doing it. So here is the storyboard again, only this time, with the puppets themselves taking part.

Ehbeh dreaming, he dreams of bells and goats.

A stream of moonlight falls upon his sleeping face, waking him.

He sits up in alarm to see the curtains beckoning him.

Overcome by an urge to seek the nearest source of water he dashes downstairs and rushes from the house, with the strongest compulsion to see the fountain that lies deep in the enchanted forest. He stumbles down the moonlit hill…..

Fighting his way through the undergrowth, he reaches the water source. Away up the hill it gushes from the mouth of the old moss covered fountain.

He quickly wades in to the chilly swirling waters and strips off his nightshirt….. 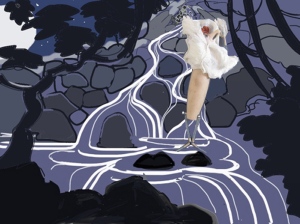 He tosses it aside. 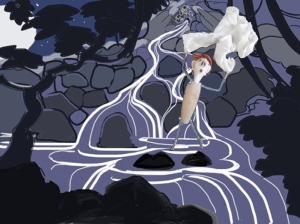 In the cold blue light of the moon, EhBeh, now naked, scrambles over the slippery wet rocks, up to opening.  This ancient moss-covered fountain regurgitates these weirdly watery words which glisten and bubble as they gush from the gaping black hole ……. 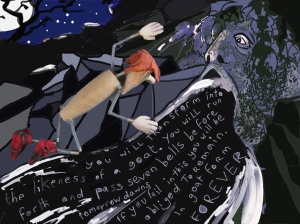 He reads the watery words, stands up and with his hands on hips, tosses his head in disdainful disbelief, but as he does so it feels top-heavy and cumbersome. His hands reach up only to feel 2 unfamiliar shapes, and hear the clop of hoof on horn.

When he lowers his limbs,  he perceives his cloven hooves with horror, and slumps unwittingly on to all fours. Unable to rise back up onto his legs, he lets out a  prolonged enfeebled bleat. Then, gazing into the black waters gushing from the fountain, he beholds the reflection of a wild long-haired goat.

So , what to do? He realises that he only has a few dark hours in which to fulfil  the conditions of these words, or he will be cursed forever, he sets off…….

…………..after fighting his way through forest undergrowth he reaches a moonlit clearing, from which, at last, he can see the dark brooding silhouette of St Georges de Montclar.

He has reached his first destination. In the square, the church tower looms high above, the 3 great iron bells hang soundless, silently watching, moonlight glinting on metal. He canters through the narrow sleepy  streets,

A dark shadowy figure  appears out of the gloom , it threateningly blocks his way…

The figure grabs him as he tries to slide past, there is a scuffle, he scrambles to his feet,  bucking and kicking, and somehow manages to break free…..

And that’s the end of the first series of drawings, and completes my offering to the Online Exhibition.  I will carry on with these  ideas in  any spare moments I find and finish it at a later date, but the deadline for the Puppet Challenge is met ( ish) at last.

14 thoughts on “The puppet challenge: storyboard with puppets”